‘Tis the season to be controversial, so let’s take a stroll down memory lane to Ken Henderson’s classic Inside the SQL Server 2000 User Mode Scheduler:

The lists behind the legend

I have not gone as far as opening up my rusty copy of SQL Server 2000 to see how Ken’s description fits in there, but I am now pretty certain that the above quote has transmuted over the years into a common misunderstanding about SQLOS scheduling mechanics.

Now nothing Ken said is untrue or particularly out of date. It is just that we often hear “the waiter list” (by implication handling resource waits) described as an attribute of a scheduler, which is not the case.

Let’s revisit when the scheduler code runs, and what it does:

The single most important list that a scheduler owns is the collection of runnable workers, that is, the subset of workers belonging to this scheduler who are not waiting for anything other than CPU. This has variously been described as a list and a queue; I shall be using the term “runnable queue” by convention, but be aware that it is a data structure that has changed over the years and isn’t a simple queue.

A scheduler has one piece of “creative” interaction with this runnable queue, and it comes with only two variables:

Core scheduler code running during context switching only dequeues runnable workers, and at such moments a given scheduler only looks at its own runnable queue. In contrast, code running all over the place, including in the context of workers belonging to other schedulers, may enqueue workers on to the runnable queue.

Time for a simple diagram: 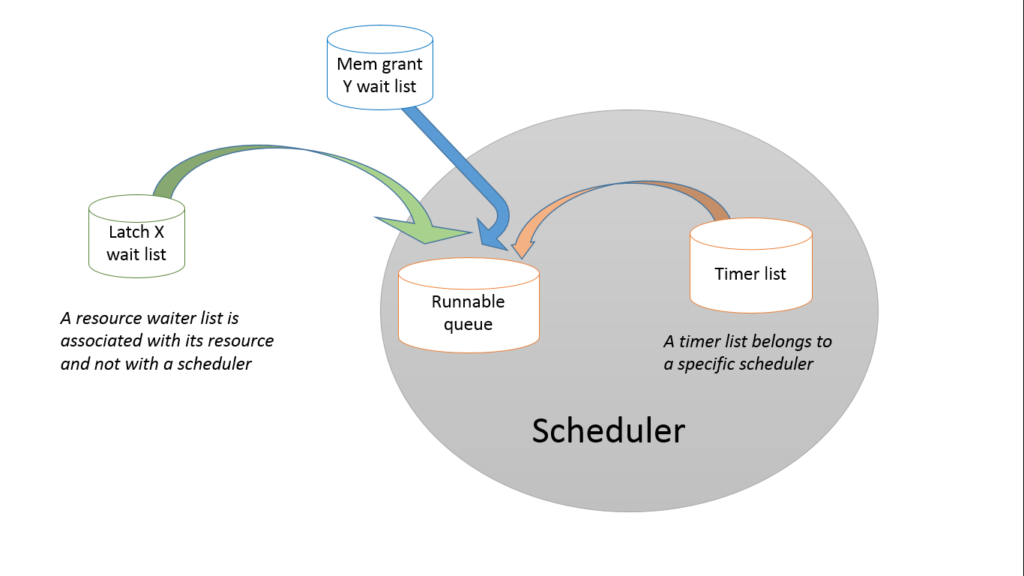 Someone to watch over me

What I’m trying to get across here is that each instance of a waitable resource has its own wait list, and the scheduler has no interest in this, because a scheduler only acts upon its runnable queue. Seen from a different angle, once a worker is waiting on a resource, its scheduler doesn’t care, because it can’t and won’t manage the waiting logic of something like a latch. This splits the responsibilities neatly in two:

The I/O and timer lists

There are however two cases where the scheduler decides to make a worker runnable in the normal course of events. One is when a worker was waiting on I/O to complete, where periodic scheduler housekeeping is the mechanism by which SQLOS takes note of the I/O completion. At this point some workers who were on the I/O list may find themselves moved to the runnable queue just before the next worker is picked to be granted ownership of the scheduler – the lucky winner might be one of these workers, or it may be someone else who has been runnable for a while.

The second, and actually more interesting case, is the timer list. In its simplest use case, this is where you will find workers executing T-SQL WAITFOR statements. The list is neatly ordered by timer expiry date, and at each invocation of the scheduler context-switch housekeeping, workers whose timer expiry dates have now passed will be moved to the runnable queue.

What makes a timer list particularly interesting though, is when it implements a resource wait timeout, for instance a lock timeout. In this scenario we actually have a worker waiting on two things simultaneously: a resource and a timer. If the resource is acquired before the timer expires, all is good: the worker goes on to the runnable queue, and upon being woken up it finds a thumbs-up as the return value of its resource acquisition call.

However, should the timer expire before the resource has been acquired, the scheduler will actually venture forth and take the worker off that waiter list before making it runnable and setting an error return value as wake-up call. Think of it as every teenager’s worst nightmare: you’re not home by curfew, so Mom comes to your dodgy party to drag your sorry ass home. And then you wake up with a hangover and note stuck to your forehead reading “No cake for you”.

I tried to keep this comparatively high-level, but might take a nice little detour into the WorkerTimerRequest some day if time permits.

There you have it. Be home on time and have a thread-safe festive season.

2 thoughts on “Scheduler stories: The myth of the waiter list”